Just knocked You Are The One off my to-do list.

Granted, Sing Your Freedom was far more of a challenge -- the main rhythm (that I followed, anyway) was five beats per measure for the verses, four for the chorus. During the breakdown I actually had one part where half the dancers are working in five-beat measures (following the lead guitar, plus they were dancer's counts*) and the other half are working in eight-beat measures (following the bass guitar) -- simultaneously.

Add to that the fact that it was my first ever piece in BMN and the dance kind of took on a life of its own as I worked on it... honestly, there are steps in there that I don't think I could even perform. (But oh, do they look good on the stage in my mind...)

After such a steep learning curve in Sing Your Freedom, I'm not actually surprised that I cut my composition time down to a fifth. Not only am I far more comfortable with the notation now, You Are The One has half the performers of Sing Your Freedom, plus it's two and a half minutes shorter.

Still, it's a nice feeling to be able to tell myself yes, I can compose an entire dance in two weeks.


*Dancer's counts -- When you count to the music according to the timing of the dance step, not the actual number of beats per measure that would be written on the sheet music. We have one exercise in our ballet class that's actually (from a musician's perspective) in 9/8 time, but we dancers count it as 1-2-3-4-5-6, because that's the timing of the steps.
Posted by Sarah-Kate at 1:43 AM No comments:

I don't know what to say. My heart is heavy as I type.

We are now under a Nazi government.

Start a firestorm in the comments if you like, but you mark my words. If nothing changes, if God sees fit to leave us as Albertans in our depravity... I shudder at the thought. They have clearly stated that they will indoctrinate our children (can you say 'Hitler youth'?) and those children will grow up to lead our country in thirty years.

How shall they lead a country when all they have been taught -- all they will ever know -- are the perverted whims of a power-hungry, family-destroying, disrespectful government?

In fact, even now it is happening. I see this indoctrination in otherwise very intelligent and rational people.

The enemy does not lie in wait at our door anymore, he is already inside.

Please, Christian brothers and sisters around the world, pray for us. We who see what's coming are despondent today -- speechless. This is a terrible blow. We are disillusioned and weakened by the shock and yet in the near future we will have to fight harder than I think any of us alive today have ever fought to hang on to our freedom. Please pray for our government to be transformed by the power of the Holy Spirit, that we will be strong in the face of what appears to be swift and inevitable persecution, and especially that we would be faithful in praying for you as you have and will so lovingly pray for us.
Posted by Sarah-Kate at 1:07 AM No comments:

Those were the words of the hour at 3.13 this morning. I posted it once as my status and I wrote it on a friend's wall as well. Plus, of course, I squealed and danced and jumped around in excitement. In fact, about half an hour ago I just jumped around my room totally randomly and squealed in excitement again.

The Sing Your Freedom choreography is done!

I've written eight novels. Of course, now it's gotten to the point where writing a novel is totally normal and more of a lifestyle than something to celebrate, but even when I finished my first novel draft back in July 2008, I don't remember this. I was definitely excited, make no mistake, but I wasn't this excited.

Sometime after 2.50 am (I'm not exactly sure of the time), I listened through the twenty seconds again and counted beats once more because I'd lost my place.

And I realised I had only one measure to go.

All I had to do was get the last four dancers off the stage and it would be DONE! (This was where I started jumping around in my chair and silently squealing in giddy anticipation.)

My first ever finished piece is complete!

It's interesting that when I logged onto Facebook tonight, the White Heart fan page had posted that today is Rick Florian's birthday. (Lead singer 1986-1997, sang lead on Sing Your Freedom.)

Doesn't that make this so much more epic?
Posted by Sarah-Kate at 10:32 PM 2 comments:

I have this pencil.

It has a slender black body, once shiny but my fingers have long since worn off the finish. It had a pink clip on it, which I accidentally broke at Bible study during prayer and the broken piece clattered quite loudly onto the floor at my feet.
It has a matching pink finger grip, which heats up and and begins to slide down over the point if I use it long enough and then I have to push it back up on the body every once in a while so I can keep control of the thing.

The eraser is flat and unusable, formerly white but stained with graphite grey and a bit yellowed from its travels. The bit of plastic that holds what's left of the eraser in place is cracked in two places and there's a small dent in it too.

It takes 0.7mm lead refills and I have probably half a dozen of those little plastic containers with spare leads strewn about my room and across various bags because I'm paranoid about running out of lead at any moment (even though at almost any given moment I also have half a dozen pens on my person). It's been with me on countless forays into town for errands, it's put many pages of math behind it, it's been a part of many, many letters to my childhood friend, it's been on several youth camping trips, it's been to Vancouver with me, to the labyrinth where we played broom hockey in the pouring rain, to the beach where I watched the most beautiful sunset I have ever seen in my entire life (still kicking myself for not bringing the camera), to the little church where we made lunch and mixed gallons and gallons of juice for the kids to keep hydrated in forty-degree weather. Come to think of it, it probably came to Kelowna with me to visit my great-uncle and great-aunt when I was eleven.

I've had it for probably about nine years now.

But lately it has been showing signs of being discontent with writing choreography and jotting down email addresses of other artists I happen to meet and is making attempts at escaping.

No less than three times today it has been sitting on my desk, beside my computer -- its usual place -- and I've accidentally bumped it and it's fallen off.

No less than three times today I've had to get on my hands and knees and crawl about on the floor to find it, only to find it several feet away from where it would have fallen. (It's worth noting that my floor is carpeted.)

In fact, the last time I ended up nearly tearing my room apart looking for the stupid thing before I finally found it hiding deep within the recesses of my messenger bag -- way over at the other end of the desk.

It's now directly in the middle of the desk, right in my sightline as I touch-type this.

And so help me it is not. going. anywhere.
Posted by Sarah-Kate at 11:09 PM No comments:

Come and see the things the Lord can do...
Posted by Sarah-Kate at 9:33 AM No comments:

I've been trying for a week to complete the last forty seconds of Sing Your Freedom. Today I finally got it down to 31 seconds remaining.

I was hoping to have You Are The One half-finished by now. I've only got the first four or five bars and those I composed back in January.

There's a Canada-wide publishing contest looming -- it closes 15 June. The winner gets their novel published and marketed for free. My mother has convinced me to try to speed-revise Reuben (August 2010). I've done the first three pages. I figure if I don't get it done by this June, I can keep working at it and have it ready for next June, as it's an annual contest.

I'm almost completely out of money. Today I doubled the inventory of the Etsy shop, but so far no-one's bought anything. At the moment I don't even have enough money to cover the cost of developing the film I shot yesterday.

I made up a daily schedule the other day that I plan to implement starting this Monday (9 April). I carefully scheduled in time for revising Reuben and time for composing choreography. I was rather surprised to find I had nine and a half hours three days out of the week that I wasn't really making the most of. I had no idea I spent that much time on the Internet.

Under terms of my new schedule, I will have at most an hour a day on the Internet (excluding Etsy shop upkeep -- I have forty-five minutes for that). I'd better learn to write blog posts faster and/or lower my impossible standards or I'm not going to post much...

I've recently become fascinated with buttons -- the little pin-back type. I searched for old Christian band buttons (Petra, White Heart, etc.) on eBay and Etsy, but yielded nothing. (However, I did find a lovely leather jacket from Petra's On Fire! tour in 1988.)

I hope to finish Sing Your Freedom tonight. I'm midway through page twenty-nine of notation.
Posted by Sarah-Kate at 11:25 PM No comments: 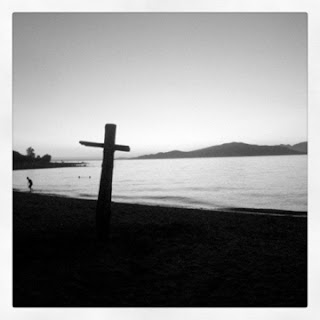 And what better way to enjoy it than with a little Petra?

He paid the ransom due
And tore the Temple veil in two
And opened up the way for me and you...
It is finished.
Posted by Sarah-Kate at 11:01 PM No comments: